Regal breeding shows up for Royal Cadence in South Australia

Each month Harness Breeders Victoria profiles a member-bred horse who has claimed their $7000 or $3500 Vicbred First Win Bonus and the Wednesday Winner for February is Royal Cadence, who was bred by members the Cormack family. 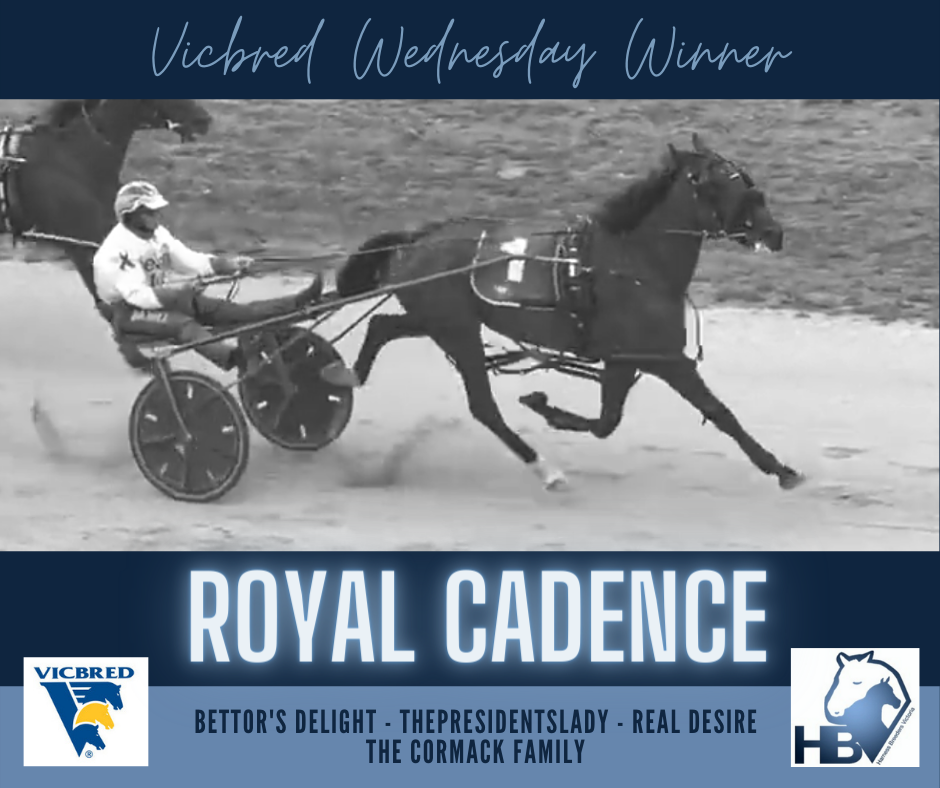 Royal Cadence, by Woodlands Stud’s Bettor’s Delight, has now had 12 starts across her lifetime, five as a juvenile, finishing her 3YO year with a third place and now as a 4YO mare has had seven starts with two seconds and, in addition to her maiden $7000 Vicbred First Win at Mildura, a second victory at Strathalbyn at the end of February.

Her most recent run after a short spell was on Horsham Trotters Cup day where she finished a close fourth in the Noel Smith Memorial Invitational.

Her dam, Thepresidentslady, retired after just five successful 2YO starts – a winner in one and only unplaced once.

The Real Desire mare was also bred by the Cormack family in South Australia and, being from Mixed With A Twist (Presidential Ball, $37,000), is a sister to the successful Group-level horse, Belladonna Girl (He’s Watching, $107,000).

The last foal from Mixed With A Twist is an American Ideal filly, My Ideal, yet to debut for trainer Jamie Williams.

While Belladonna Girl is the most successful of the four siblings to race (her three other foals died before reaching the track), all have recorded wins including Mixedwithajasper (Village Jasper, $68,000) who ran second in the 2014 3YO C&G Southern Cross Final.

Royal Cadence is the first foal to race from Thepresidentslady, who has subsequently thrown a 2019 colt to Vincent and was last served by the same sire in 2020.

Real Desire was retired from stud duties last year having served most of his career in North America after limited shuttle journeys to Australasia up to 2012. His millionaire son Tell All continues to stand in Australia, but the best of his local winners were NZ-bred Lets Elope ($596,000) and The Parade ($425,000).

As a broodmare sire, Real Desire (Life Sign) has been represented on the track by just 62 starters who have amassed more than $1.57 million in earnings. The cross for his mares with Bettor’s Delight has already proven a successful one, producing Northview Hustler ($267,000), Our Cowgirls N Lace ($92,000) and Cheyenne Warrior ($65,000).

The most successful son of a Real Desire mare in Australia is the sire He’s Watching, who, although by American Ideal, shares with Royal Cadence a 4x4 to Abercrombie and a fourth generation presence of Albatross.

The seventh dam of Royal Cadence is a mare named Arania, who in 1961 became the fastest mare bred outside of North America when she paced in 1:57 at the Red Mile in Kentucky.  At that time only three mares had gone faster. She ran third in the 1961 Inter Dominion.

Arania was by the great U Scott, the mid-20th century equivalent of Bettor’s Delight. She was out of Local Gold, who won the 1945 NZ Great Northern Derby and was a half-sister to Local Light (by Light Brigade), who was to sire 196 winners in New Zealand.

Local Gold was bred 2x2 to mares who were by Rey De Oro out of Logan Pointer mares. Rey De Oro (1917, 230 winners) represented a cross of the blood of Harold and Steinway, both influential names in the foundation of the standardbred breed appearing in the pedigrees of Childe Harold and Globe Derby. Logan Pointer (1909, 191 winners) only survived nine seasons in New Zealand before a paddock accident claimed his life, but his produce out performed many others in the same era who had greater longevity.

His worth was as a broodmare sire. His second dam, Ripple, has a pedigree of some interest. Her sire’s broodmare sire, her dam’s broodmare sire and the sire of her second dam are all the same sire, a horse named Flaxtail. The influence of Ripple on Logan Pointer is a matter for conjecture, but Logan Pointer was not the first or the last successful sire to have an inbred second or third dam - Dean Hanover is a fine example of such an occurrence (from Stallions: AU & NZ Foundation Sires 1860-1960 by Nick Hooper).