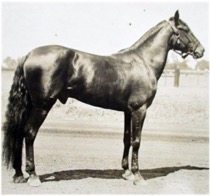 In the early part of the 19th century, Bendigo businessman Robert Matchett and his stud manager, the experienced owner/trainer/ driver Bob Crowe, spent considerable money on American stallions that they purchased and imported.

Following the establishment in 1903 of the Adelaide Hill Stud at Huntly, eight kilometres north of Bendigo, Crowe travelled by ship to the USA at least three times to research and buy horses on Matchett’s behalf, and then ship them to Australia to populate the breeding operation at the 200-acre property adjacent to the Bendigo Creek.

The impact of the seven Adelaide Hills sires continues to be seen in the modern day, with champions such as Our Sir Vancelot, Banglez and Major Moth all tracing back to these important bloodlines.