A double up for April's Wednesday Vicbred star 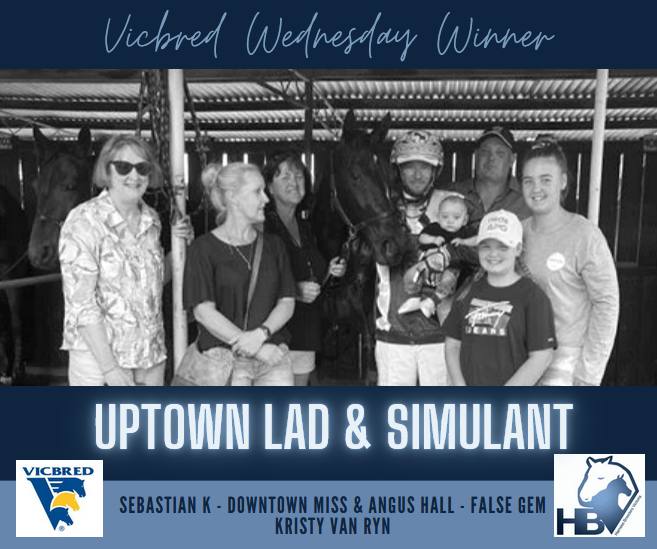 Due to a remarkable breeding effort, we have two Wednesday Winners for April - Simulant and Uptown Lad, both bred by member, Kristy van Ryn.

Let’s start with Simulant, a three-year-old gelding by Angus Hall, who recorded his first win in April and has followed up with a Maryborough win.

They're part of two wins and two placings from his five lifetime starts.

He is the last of just three foals from SJ’s Photo mare False Gem, who died along with her last foal in 2017, a great shame given that she is now a 100 per cent producer.

Aside from being the father of successful sires like Majestic Son and Imperial Count, Angus Hall has been an outstanding stallion in Australia, with multiple siring awards and honours.

False Gem’s first foal was a colt by Armbro Variable, who went on to earn more than $97,000 in his 60-start career, including a personal best of TR 1:57.0 and both the Group 2 Keystone Del Trot in 2017 and the Listed Classic Abrahams 2YO Trot Classic as a juvenile.

Her second foal was a Majestic Son filly, who raced as Downtown Miss and recorded six wins across her career.

It is through Simulant’s sister that we find our second Vicbred Wednesday Winner, the Sebastian K 2YO, Uptown Lad.

Downtown Miss had lined up 34 times in races for five wins up until her ninth placing at Ballarat on October 5, 2018.

Three days later, she was served by Sebastian K. The resulting foal was Uptown Lad, a nephew of Simulant.

Downtown Miss resumed her place on the race track for new owners in September 2020, recording a further win and three placings before her retirement in mid-2021. Back in the breeding barn permanently now for Helen Friend, she has a positive pregnancy test to Aldebaran Park’s Skyvalley.

Sebastian K, now deceased but formerly stood by Niota Bloodstock in Victoria’s Goulburn Valley, has five crops on the ground in Australia, with Uptown Lad one of his 14 foals from the 2019 season.

Uptown Lad is one of 16 starters to date for the sire and one of his nine winners. The best of his progeny is undoubtably On Advice ($88,000) from Pegasus Spur mare Sunny Imperial, but the only other starter so far who is also from a Majestic Son mare is the filly Oonskade, who is winless from six starts in Queensland. He has been placed four times and never finished further back than fifth.

False Gem, dam of Simulant and granddam of Uptown Lad, was a daughter of Ornamental Jewel ($31,000, Preux Chevalier). She had four foals, of which three reached the race track. Both Jewel Of The Night ($72,000, Keystone Salute) and False Gem were winners. Ornamental Jewel was one of four winners from Trinket (Rodilo).

False Gem retired with a terrific record - $178,000 from her 17 wins and 37 placings, which included victories in the Group 3 Lightfoot Laurels in 2008 at Moonee Valley.

She placed second in the Group 1 2005 Vicbred 3YO Trotters Final behind Tennotrump (A Go Go Lauxmont); fifth place-getter in this field was 2021 Victorian Trotting Broodmare of the Year nominee, Steffi Jay.

Jewel Of The Night is owned by members the Pangrazio family and was most recently bred to Tennotrump, resulting in a 2021 colt. Of her named progeny, the most successful to date is Basil Knight ($33,000, Bacardi Lindy).